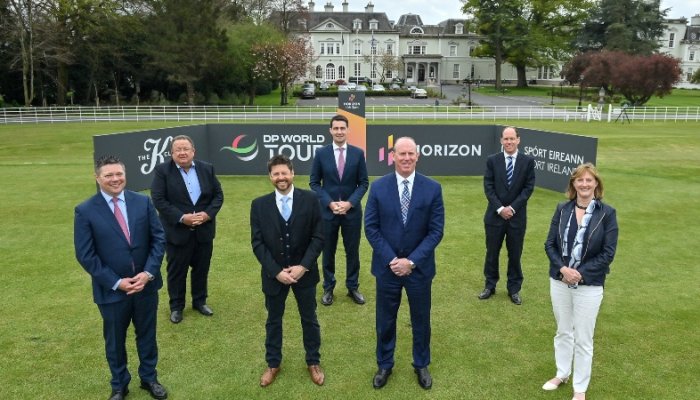 The Horizon Irish Open will return to The K Club as part of a long-term deal with the DP World Tour, which will see the island of Ireland’s national Open played at the former Ryder Cup venue in 2023, 2025 and 2027.

The K Club’s commitment to the development of Irish professional golf is further enhanced by the news that the resort’s second Arnold Palmer-designed course, Palmer South, will also play host to the Challenge Tour’s Irish Challenge in the intervening years, beginning this July and again in 2024 and 2026.

The announcement continues the momentum surrounding the Horizon Irish Open, with Horizon Therapeutics - the global biotechnology company headquartered in Dublin – having signed a six-year title sponsorship deal in February, beginning with this year’s event at Mount Juliet Estate from June 30-July 3.

Next year will be just the second time The K Club has hosted the Irish Open, having done so for the first time in 2016, when four-time Major winner Rory McIlroy claimed a famous victory which will live long in the memory of Irish sports fans.

Ten years prior to that momentous occasion, the stunning Kildare venue made history when it became the first Irish venue to host the Ryder Cup. Under Captain Ian Woosnam, Europe marched to a commanding 18½-9½ victory over the USA – with recently-announced European Captain for 2023, Henrik Stenson, holing the winning putt on his debut in the biennial contest.

Guy Kinnings, the DP World Tour’s Deputy CEO, Ryder Cup Director and Chief Commercial Officer, said: “We share a special connection with The K Club through their hosting of the 2006 Ryder Cup, and we thank them for their commitment to the development of Irish golf through this long-term deal with both the DP World Tour and Challenge Tour.

“This news, along with the announcement earlier in the year of Horizon as title sponsors of the Irish Open until at least 2027, underlines the strength of our sport in Ireland, as we build towards the return of the Ryder Cup to Irish shores for its centenary edition in five years’ time at Adare Manor.”

Minister of State for Sport and the Gaeltacht, Jack Chambers TD, said: “Ireland has a rich tradition in producing world-class golfing talent and I am particularly delighted to see so many Irish golfers in the field for the 2022 tournament.

“The Government’s investment in the Golf Ireland Professional Scheme continues to assist Ireland’s emerging professional players as they strive to progress through the ranks. The Horizon Irish Open is a wonderful showcase for Irish golf and for Ireland as a tourism destination.

“Our passion for golf, combined with our renowned tradition of hospitality, makes us want to share our courses and our companionship with visitors. The K Club will be the perfect host for the spectators present and for an international audience, following play from around the world.”

Paul Heery, General Manager of The K Club, said: “The K Club has always been well known as a venue for hosting successful, international golf events and now with the guidance and fresh energy from new ownership, we are delighted to be back hosting tournaments of this calibre once again.

“The K Club is evolving. We are on a journey to establish a new legacy at the resort where supporting the golfing community in Ireland is an extremely important focus for us. The team at The K Club are incredibly proud to be making this long-term commitment to Irish golf which will see us host six years of high profile tournaments in Ireland.

“We very much look forward to welcoming players from all over the world to The K Club and watching the dramatic action unfold on the fairways of our Arnold Palmer designed courses once again.”

Timothy P. Walbert, Chairman, President and CEO, Horizon Therapeutics: “To have this historic tournament associated with one of Ireland’s most prized golf venues signifies the momentum that is building for the sport and for the Horizon Irish Open.

“As we continue to grow as a company in Ireland, we also look forward to doing our part to grow the interest in the island’s national open and are excited for what the future will bring with The K Club and the DP World Tour partnerships.”

Dr Una May, CEO Sport Ireland, said: “It’s an exciting time for this tournament and I look forward to working with the DP World Tour and all of the tournament hosts over the next few years to help bring this great event to new levels of success.

“I am delighted that Sport Ireland, through its sponsorship of the Horizon Irish Open, has been able to offer two invitations to emerging Irish golfers. This will provide players with the opportunity to play in a top class DP World Tour event on home soil, and help further their careers as professional golfers.”

Like the Ryder Cup, the Irish Open was also first played in 1927 and it is now one of the world’s most famous national opens, boasting former champions such as Seve Ballesteros, Sir Nick Faldo, Pádraig Harrington, Bernhard Langer, Rory McIlroy, Colin Montgomerie, José María Olazábal and Jon Rahm.

The 2022 edition will once again form part of the Open Qualifying Series, with the top three players not already exempt earning a coveted place in the 150th edition of the Open Championship, taking place two weeks later on the Old Course at St Andrews.

The Irish Challenge returned to the Challenge Tour back in 2015 and has been played every year since – barring 2020 due to the pandemic.

The Ladies European Tour, meanwhile, will return to Irish shores for the first time in ten years when the Women’s Irish Open takes place at Dromoland Castle this September.

It was announced in February that all general admission tickets for Sunday at the 2022 Horizon Irish Open have sold out, the earliest sell-out day in the history of the DP World Tour. Limited tickets still remain for the Wednesday Celebrity Pro-Am, as well as the first three tournament days – Thursday, Friday and Saturday.

Premium Experience hospitality packages are also selling fast, with The Range Club – an ideal offering for smaller groups wishing to relax in style and enjoy outstanding service in a relaxed hospitality environment – already sold out on Sunday.

General admission tickets and Premium Experience hospitality packages, which also include the Green on 18 experience, can be purchased here and fans are encouraged to purchase in advance to avoid disappointment.

About The K Club:

The K Club is one of Ireland’s leading five-star golf resorts, tucked away in the beautiful Kildare countryside just a short drive from Dublin city centre. With an authentic country mansion hotel at its heart overlooking stunning gardens, The K Club is also home to K Golf World and two Arnold Palmer designed championship golf courses, The Palmer North and The Palmer South. These destination courses have played host to the Ryder Cup in 2006, the Dubai Duty Free Irish Open in 2016 and 13 European Opens. Indoors at The K Club offers guests an endless journey of luxury and relaxation with a wide variety of bars and restaurants, indulgent spa treatments in the award-winning K Spa, handsome drawing rooms and magnificent interiors. For more see www.kclub.ie

Horizon is focused on the discovery, development and commercialization of medicines that address critical needs for people impacted by rare, autoimmune and severe inflammatory diseases. Our pipeline is purposeful: We apply scientific expertise and courage to bring clinically meaningful therapies to patients. We believe science and compassion must work together to transform lives. For more information on how we go to incredible lengths to impact lives, visit www.horizontherapeutics.com and follow us on Twitter, LinkedIn, Instagram and Facebook.

About the DP World Tour

The DP World Tour is the main men’s professional golf Tour of the European Tour group, with a global schedule featuring a minimum of 45 tournaments in 25 different countries across the 2022 season.

Formerly known as the European Tour, which was established in 1972, the 2022 DP World Tour schedule includes five Rolex Series events, along with four Major Championships, two World Golf Championship events and three tournaments co-sanctioned with the PGA TOUR, as well as tournaments staged around the world with a minimum prize of $2million for all events solely sanctioned by the DP World Tour.

DP World, the leading provider of global smart end-to-end supply chain and logistics solutions, is the title partner of the DP World Tour, which is administered by the European Tour group.

About the European Tour group

The European Tour group is the overarching corporate brand which administers four competition brands: the DP World Tour, the Challenge Tour, the Legends Tour and, along with the PGA of America, is the Managing Partner of golf’s greatest team contest, the Ryder Cup.

Established in 1972, the European Tour group is committed to ‘Driving Golf Further’ through our guiding principles of being innovative, inclusive and global.

Innovative: We are driving innovation in golf through the creation of award-winning content, pioneering tournament formats and the use of the latest technology and inventive fan engagement. We are committed to attracting new audiences whilst respecting the tradition of our sport.

Inclusive: We are committed to include all who share a love for the game of golf. We are passionate about a closer collaboration with the women’s game, golf for the disabled and promoting the many physical and mental health benefits of playing golf.

Global: Since 1972, players from 37 different countries have won tournaments on our main Tour, while our live broadcast reaches more than 490 million homes in more than 150 countries every week, generating in excess of 2,200 global broadcast hours for each event. We also enjoy the support of many of the world’s leading business brands with DP World, Rolex, BMW, Callaway, Emirates, Fortinet, Velocity Global and Zoom as Official Partners.

The European Tour group has Strategic Alliances with the PGA TOUR, the Sunshine Tour and ISPS Handa PGA Tour of Australasia, while we also drive positive community impact through our overarching CSR programme, Golf for Good.