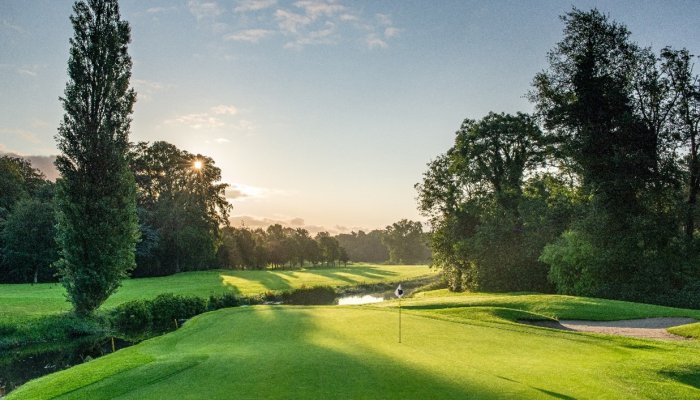 The Horizon Irish Open will assume a new place on the DP World Tour’s International Schedule next season when it is contested from September 7-10, 2023.

As announced in April, the island of Ireland’s national open will be played at The K Club in County Kildare, with the 2006 Ryder Cup venue also hosting the Horizon Irish Open in 2025 and 2027, with the Challenge Tour’s Irish Challenge being played there in the intervening years, 2022, 2024 and 2026.

Next year’s tournament will be the second staging of the Irish Open at The K Club, the first time coming in 2016 when Rory McIlroy famously claimed the title as he eagled the final hole to win by three strokes, earning his first professional victory on Irish soil.

For Horizon Therapeutics, the global biotechnology company headquartered in Dublin, next September’s tournament will be the second of a six-year agreement signed in February 2022.

Paul Heery, General Manager of The K Club, said: “The K Club has always had a strong reputation as a venue for hosting successful, international golf events. Now, with the guidance and fresh energy from new ownership, we are delighted to be back hosting tournaments of this calibre.

“Supporting the golfing community in Ireland is an extremely important focus for us at The K Club. Our team is incredibly proud to be making this long-term commitment to Irish golf which will see us host six years of high-profile tournaments in Ireland.

“The new date for the Horizon Irish Open will attract a stronger field of golfers, resulting in a more exciting and engaging event for both competitors and followers. We very much look forward to welcoming players from all over the world to our Arnold Palmer designed courses and watching the dramatic action unfold on the fairways.”

Timothy P Walbert, CEO of Horizon Therapeutics, said: “This year’s Horizon Irish Open was a success with record crowds, a significant amount of money raised for Make-A-Wish® Ireland and a first-time DP World Tour winner. This tournament holds a significant place in Irish golf tradition and we are very pleased with the collaboration between the tour and the K Club to build on that tradition in September of 2023.”

“The Irish Open is one of the highlights of Ireland’s sporting calendar and we look forward to staging the event at a time when European golf will be at the forefront of everyone’s mind ahead of the Ryder Cup.”

In terms of the 2023 Ryder Cup, as announced in August, the qualification for the European Team will conclude on Sunday September 3, the week ahead of the Horizon Irish Open.

The full 2023 DP World Tour schedule will be announced in due course.

Make-A-Wish® Ireland, which celebrated its 30th anniversary this year, will once again be the Official Charity of the Horizon Irish Open. Nearly €121,000 was raised for the charity at the 2022 Irish Open, including €18,500 as part of the Birdies for Wishes initiative, with €500 donated for every birdie made on the 18th hole that week.

Fans are invited to register their interest in purchasing tickets for the 2023 Horizon Irish Open and are urged to do so to avoid disappointment. Last year, General Admission was sold out on Saturday and Sunday, with Premium Experiences also completely sold out during the week of the tournament. Click here to register your interest.

First played in 1927, the Irish Open is one of the world’s most famous national opens, boasting former champions such as Seve Ballesteros, Sir Nick Faldo, Pádraig Harrington, Bernhard Langer, Rory McIlroy, Colin Montgomerie, José María Olazábal and Jon Rahm. History was made earlier this year when Adrian Meronk became the first Polish winner on the DP World Tour as he triumphed at Mount Juliet Estate.

About the DP World Tour

The DP World Tour is the main men’s professional golf Tour of the European Tour group, with a global schedule featuring a minimum of 43 tournaments in 21 different countries across the 2022 season.

Formerly known as the European Tour, which was established in 1972, the 2022 DP World Tour schedule includes five Rolex Series events, along with four Major Championships, two World Golf Championship events and three tournaments co-sanctioned with the PGA TOUR, as well as tournaments staged around the world with a minimum prize of $2million for all events solely sanctioned by the DP World Tour.

DP World, the leading provider of global smart end-to-end supply chain and logistics solutions, is the title partner of the DP World Tour, which is administered by the European Tour group.

About the European Tour group

The European Tour group is the overarching corporate brand which administers four competition brands: the DP World Tour, the Challenge Tour, the Legends Tour and, along with the PGA of America, is the Managing Partner of golf’s greatest team contest, the Ryder Cup.

Established in 1972, the European Tour group is committed to ‘Driving Golf Further’ through our guiding principles of being innovative, inclusive and global.

Innovative: We are driving innovation in golf through the creation of award-winning content, pioneering tournament formats and the use of the latest technology and inventive fan engagement. We are committed to attracting new audiences whilst respecting the tradition of our sport.

Inclusive: We are committed to include all who share a love for the game of golf. We are passionate about a closer collaboration with the women’s game, golf for the disabled and promoting the many physical and mental health benefits of playing golf.

Global: Since 1972, players from 37 different countries have won tournaments on our main Tour, while our live broadcast reaches more than 490 million homes in more than 150 countries every week, generating in excess of 2,200 global broadcast hours for each event. We also enjoy the support of many of the world’s leading business brands with DP World, Rolex, BMW, Callaway, Emirates, Fortinet, Hilton, Velocity Global and Zoom as Official Partners.

The European Tour group has Strategic Alliances with the PGA TOUR, the Sunshine Tour and ISPS Handa PGA Tour of Australasia, while we also drive positive community impact through our overarching CSR programme, Golf for Good.

Horizon is a global biotechnology company focused on the discovery, development and commercialization of medicines that address critical needs for people impacted by rare, autoimmune and severe inflammatory diseases. Our pipeline is purposeful: We apply scientific expertise and courage to bring clinically meaningful therapies to patients. We believe science and compassion must work together to transform lives. For more information on how we go to incredible lengths to impact lives, visit www.horizontherapeutics.com and follow us on Twitter, LinkedIn, Instagram and Facebook.

About The K Club

The K Club is one of Ireland’s top golf and spa resorts, tucked away in the Kildare countryside yet just on Dublin’s doorstep.

World famous for being one of the top golf clubs in Ireland, the 5-star resort’s Arnold-Palmer designed championship golf courses have previously played host to the 2006 Ryder Cup, 2016 Dubai Duty Free Irish Open and 13 European Opens.

Since coming under new ownership, which involves a multi-year investment programme designed to carefully transform the property, The K Club has also been announced as the chosen venue to host the Horizon Irish Open in 2023, 2025 and 2027, with the Challenge Tour’s Irish Challenge being played there in the intervening years, 2024 and 2026.

State-of-the-art golfing technology also allows The K Club to transport you to some of the most iconic golf courses in the world via K Golf World’s innovative simulators which boast unrivalled graphic quality and precise on-the-spot data that allows you to understand and improve your swing.

Located only 30 minutes from Dublin, The K Club is a luxurious getaway that offers 5-star accommodation, incredible dining experiences, and an internationally-acclaimed spa.